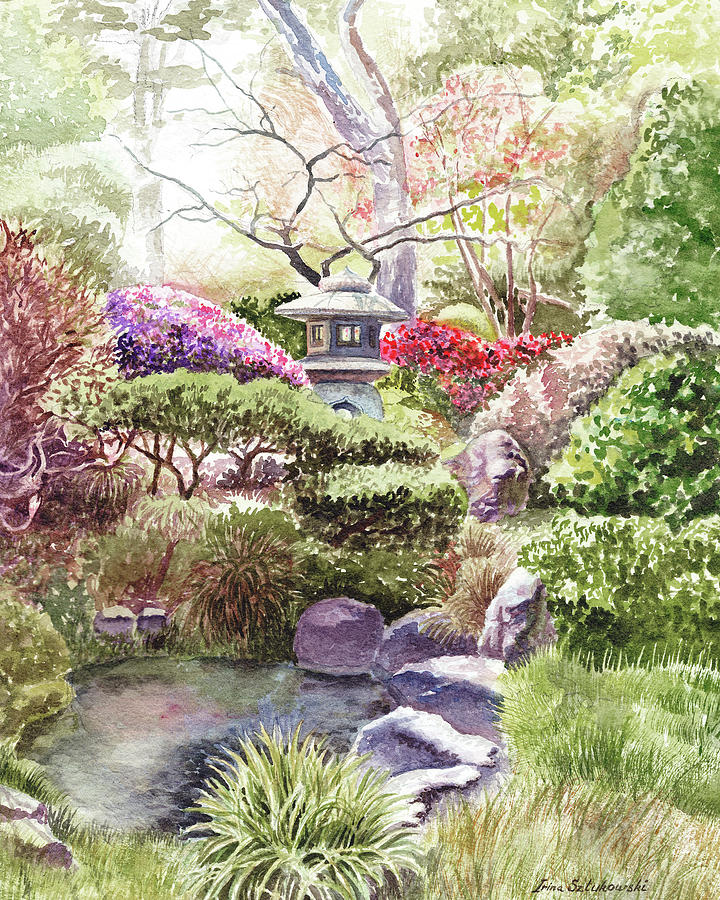 The Japanese Tea Garden in San Francisco, California, is a popular feature of Golden Gate Park, originally built as part of a sprawling World's Fair, the California Midwinter International Exposition of 1894. Tours are offered every day by San Francisco City Guides.
The oldest public Japanese garden in the United States, this complex of many paths, ponds and a teahouse features native Japanese and Chinese plants. The garden's 5 acres contain many sculptures and bridges.

After the conclusion of the 1894 World's Fair, Makoto Hagiwara, a Japanese immigrant and gardener, approached John McLaren with the idea to convert the temporary exhibit into a permanent park. Hagiwara personally oversaw the building of the Japanese Tea Garden and was official caretaker of the garden from 1895 to 1925. He specifically requested that one thousand flowering cherry trees be imported from Japan, as well as other native plants, birds, and the now famous goldfish. After San Francisco's 1915 Panama-Pacific International Exposition closed, he obtained the two large ornamental wooden gates, and probably also the Tea Garden's prominent five-tiered pagoda, from that fair's Japanese enclave.[1]
The Hagiwara family lived in and maintained the Japanese Tea Garden until 1942, when Executive Order 9066 forced them to leave San Francisco and relocate to an internment camp with thousands of other Japanese-American families. The garden was renamed the "Oriental Tea Garden" and fell into disarray.
In 1949, a large bronze Buddha, originally cast in Tajima, Japan in 1790, was presented to the garden by the S & G Gump Company. The name "Japanese Tea Garden" was officially reinstated in 1952. In 1953 the Zen Garden, designed by Nagao Sakurai and representing a modern version of kare sansui (a dry garden which symbolizes a miniature mountain scene complete with a stone waterfall and small island surrounded by a gravel river) was dedicated at the same time as the 9,000-pound (4,100 kg) Lantern of Peace, which was purchased by contributions from Japanese children and presented on their behalf as a symbol of friendship for future generations. (info is courtesy of wiki)

When you purchase a print, you can e-mail the date of purchase and the image title to Irina, and she will personally send you Certificate of Authenticity with her signature.

If you are interested in special promotions, discount codes, requesting a commission painting, or wish to license this particular artwork or a series of artworks, please contact Irina directly.

Many thanks to the Art Collector from my RedBubble gallery for purchasing print with this artwork! Irina

Thank you so much Masha! Irina

Thank you so much Relique! Irina

Irina, you have great gallery of beautiful works, L/F

Warm thanks to the Art Collector from Detroit, MI for purchasing framed print with this artwork! Irina

Many thanks to the Art Collector from Suisun City, CA for purchasing this artwork on a coffee mug today! Irina

Many thanks to the Art Collector from Brentwood, CA for purchasing the original watercolor artwork for his collection. Irina

Thank you so much dear Carmen! Irina

Thank you so much Georgia! Irina

Thank you so very much Catherine for such great comment! Irina

Beaitofi; watercolor! Love all the detail and blending of colors.

This is beautiful. A Most Beautiful Garden Indeed. FV

Thank you so much Rolando! Irina

Thank you so very much Mal! Irina

Thank you so much Ramesh! Irina

Absolutely gorgeous! Love the description with it too.

Thank you Catherine! Your comment means a lot to me :)

Thank you so much Svitozar! Irina

Thank you so much Hanne Lore! I've been to this place many times and painted this garden from different points of view as well :)

Such beautiful and delicate watercolor work, a lovely scene and so much to enjoy here LF

Thank you so very much dear Angela! Irina